Today is the day the contributions for the Mix'n Match event appear on the pages of the participant bloggers. I am therefore very honored to host Rik Riel's contribution on Biggest life lessons (first or second life) learned in SL, a topic suggested by Joan Kremer

It's great getting an opportunity to post here on Wildstar Beaumont's blog. The assignment I was given as part of the "Mix-and-Match" game created by Arminax and Vint Falken was to write about a "life lesson" that Second Life has taught me. So here goes...

One thing that Second Life has helped me see about myself is how much I am both drawn to and flee from community.

Second Life offers an amazing array of possible sub-cultures, niche interest groups, role-playing guilds, churches and sects that all together create the diverse society of Second Life. These are loosely represented by the "groups" functionality in SL, which is one way of expressing how you choose to represent yourself to the larger digital world. I.e. anyone can right-click my avatar and see what groups I am a member of, which is a way of getting at who I am.

Many Second Life residents I run into are incredibly passionate and enmeshed in their particular community, whether its a neko sim, a Star Trek RPG, a fashion design guild or a machinima crew. Residents often ask me what I "do" in SL. I often have a hard time answering this question, since I have such a broad range of interests. Usually I say that I'm a Second Life blogger and activist, but that doesn't really capture it.

More correctly, I dabble in all sorts of communities. I attend random live music acts, flit around from art museum to gallery, zip over to a fashion show, or hang out with some furries or mermaids who come across my path. But I don't commit to any particular one over an extend period of time.

In my real life, I find that the same pattern in my associations. I attend a local church but don't get involved in any of the committees or volunteer opportunities. I am vaguely civilly engaged, but don't commit serious to any particular political group or cause. I love my extended family very much, but choose to live on the other side of the country from them.

There's something in me that fears group commitments. I worry about losing my freedom. I get stressed having to negotiate the things that I want amidst the various interests of a group of other people. I see the complications before I see the benefits.

What makes Second Life interesting is that you have to explicitly choose to "join" a group, which subjects you to whatever group notices, group votes, and group chat exchanged among the members. You can't half-way join or provisionally join. You just have to say "yes" or "no" to an invite request.

Not only that, you are limited to only 25 groups that you can join. So you have to be judicious about what groups you choose, because that eliminates one potential slot that another group could occupy. Usually I'm maxed out on my groups, so every time I'm invited to a new one, I have to decide which one I want to leave. Often it's a painful choice.

I've found that I'm good at observing and reporting on the diverse happenings in Second Life, enough so that I worked for New World Notes as an event blogger and often get linked to and quoted on other sites because of my reportage on some event or subculture. I'm able to connect a particular group with the larger implications and connections that group has to the larger world. I.e. I'm good at looking from the outside in.

But I've learned that it's not enough to just be the passive, external observer. At some point, you've got to get in the game.

Second Life has taught me the importance of committing to some endeavor with other people, even if you aren't 100% sure if you want to be involved over the long haul. It's about letting go of some of your freedom and letting other people's interests and orientations interact with your own. It's letting other people in, warts and all.

My first go at this is being involved in the Nonprofit Commons, organized by Techsoup. They have regular meetings every Friday, that I try and attend. I blog on the nonprofitcommons.org site, and participate in the email list. I try and attend social events and help other groups in the Commons that need assistance when I can. I've met several Nonprofit Commons folks in the flesh at SLCC and other conferences, and count several of them as friends.

I started working at Global Kids earlier this year, which engages in all sorts of educational and civic activities on both the Main Grid and Teen Grid. Suddenly, I'm no longer just on the sidelines observing what's happening in SL, I'm in the thick of things -- organizing events and builds for Global Kids, working with a range of builders, machinimators, educators, volunteers and teens, building relationships with people.

It feels good to be a part of something, and to have longer term connections with people in Second Life. I believe it's helping me to be a more well-rounded, richer person, in whatever world I am inhabiting at the moment.


My thanks to Rik for his great contribution and I invite all to visit his very interesting blog : The Click Heard Round the World. Rik is also on the Teen Grid as part of his educational activities, so we can find a perspective in his pages that is new to many of us.

My own contribution (Alts in Second Live - A necessary evil, a fun diversion or an easy way to be dishonest , suggested by Joonie Jatho) is due to appear on Meara Deschanel's One Girl | Two Worlds blog.

The topic I suggested, Drama and neighbor wars in mainland, will be discussed by Joan Kremer on Ann O'Toole's Unique Needs blog
Posted by Wildstar Beaumont at 11:05 AM

Oh my gosh, Rik -- are you my **alt**?? Since this was my topic suggestion, I was excited to read what you'd written. But I was blown away by how similar we are in terms of making the commitment vs. staying on the sidelines! While the details differ, my experience in SL is so similar to what you've described!

Excellent post! I enjoyed it very much -- and it's given me even more to think about.

And Wildstar, so nice to be introduced to your blog this way -- I've enjoyed perusing it.

Glad to see that great bloggers blog alike! Thanks for the great topic, Joan! 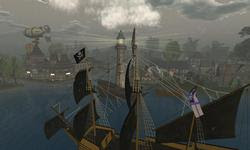