the Star of Winter 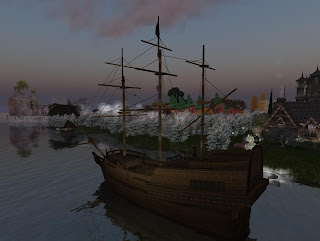 My new ship of the line, from the Black Spot Shipyards, moored in Winterfell Eventide
Posted by Wildstar Beaumont at 8:04 AM 1 comment:

I stopped in the Bay of Mishra with the Hunting Star on the way back to her home port in Eventide. Okay, if you look at the grid it is not exactly the shortest route but SL allows you to do that ;)

The Fleet Week was extremely successful for my TSS Brigg. Despite losing the final of the Windjammers Race the ship was voted as the winner of the Shipbuilding Contest. Well, I did not even know that the ship had entered the contest, so I was quite pleased that among so many ironclads in a Steampunk region, a sailship was voted as the best. Of course I have no merit at all, since I just bought the ship and the the credit is due to the skilled builder, Martina Lewsey, who I visited at the TSS shipyard, in Jabberwock, to share the news and to congratulate.

Some of the Mishra residents tell me that they enjoy the presence of the ships in the bay from time to time, so I thought to allow them to admire this beautiful ship for some days

And after all , there is something new in Eventide to be taken into account. But this is for the next time ;)

Some quiet sailing after the emotions of the Fleet Week

Video of the Fleet Week

This is an absolutely astounding video about the Fleet Week in New Babbage.
Thank you Loki !

Posted by Wildstar Beaumont at 7:20 AM 6 comments:

The Tall Ships Race was, together with the submarine race and the Uniform Ball, one of the Saturday Events of the Fleet Week in New Babbage.
The event was fun, with 3 match races: two semifinals and a final.

There were just 4 entrants, but that did not make it less interesting: Mr. Tinus Koskinen, Miss BlackOpal Galicia, Admiral Bridget Jennings, and yours truly, Captain Wildstar Beaumont. There was also a good diversity in the ships that entered the race: a Schooner from the Black Spot Shipyard, a Trudeau, a ship from the the Southern Cross Shipyard, and my TSS Brigg.

The sail field was challenging. A loop around several sims, with some tricky crossings that let you out of control for several seconds, a narrow path with many gates to go through which made it difficult to pass, once one was behind and a very tricky area where one had to sail into the wind with the danger of getting stuck.

In the first match race I faced Miss BlackOpal. It was a strange race: I believe her ship is not SL-wind propelled, which gave her an advantage at start, and I had to trail for a while. However, once my ship was up to speed it looked clear to me that the physical vehicle was sailing smoother and faster than the non-physical one. It is a pity that Black Spot ships do not work with SL wind. They are probably the most beautiful sailships in SL.

The second race saw Admiral Jennings with her SCS Battle Schooner to prevail on Mr. Koskinen

Congratulations to Admiral Jennings for a perfect race.

The crowd filled the viewing area and seemed to have a lot of fun, greatly enjoying the event.

Being busy in the race I did not have much time to take many pictures, but I invite everybody to visit this wonderful selection of PJ Trenton's images

Posted by Wildstar Beaumont at 7:42 PM No comments:

Here are some images from the Fleet Week Review that took place yesterday in New Babbage. The naviees of the steamlands nations showed themselves in an hour and a half of display of naval beauty.

Some of the captains assembled, before the review:

Myself, overlooking the review from a nice spot

Ironclads were the majority of the ships displayed there :

Here is the Hunting Star flying the colors of Winterfell

The "Hunting Star" in New Babbage

after some thinking and some testing of the sailing field I decided to take the Hunting Star (the TSS Brigg) to New Babbage, for the Fleet Week.

The Battlestar (SPD Frigate) would have looked better, but she is too challenging to sail in such a narrow field

Here are two images of myself on the deck ready to take the ship from Winterfell to New Babbage.

the Fleet Week in New Babbage! 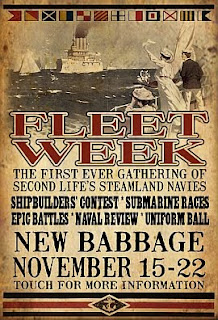 I still have to decide which ship I will take there but I will be there for the events ! :)

The Wild Fleet did not have an ironclad. Until now. Here is the new flagship of the Steam Squadron: the Iron Star! ;)

Posted by Wildstar Beaumont at 9:27 PM No comments:

I have been invited to display some of my images at Venetia Landing in Winterfell Reverie.
Miss Tracy Yiyuan and Miss Midnyte DeCuir have been so kind to wish me to display my photos in their truly beautiful portion of Winterfell. 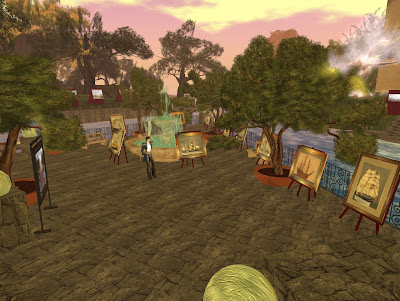 I happily agreed and I setup some of my images on a lovely spot in the middle of the area. 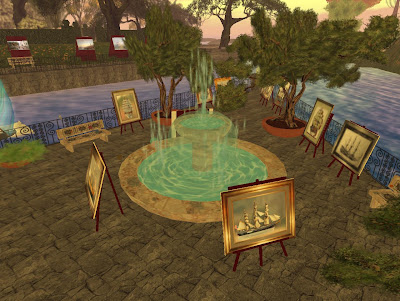 You can read more information about the exhibit in the online Visitors' Guide. and it will be open until Christmas.

Posted by Wildstar Beaumont at 8:56 PM No comments:

A new stage in my sailing tour

After quite a while I sailed a new stage of my circumnavigation of Gaeta, Corsica and Nautilus. I had last moored the Star of Faeria in the sim of Gumtree, on the western shores of Gaeta, and it was time to cross the channel liniing the two continents, back into Corsica waters.

Here is me after just entering the channel and just before meeting some other long distance sailors who were pursuing the same route.

And here is the Star of Faeria back in Corsica waters, in front of the impressive yachts on display at Star Bay Yachts.

The north eastern coast of Corsica is quite nice,  well kept, with some lovely shore where woods reach the beaches and some impressive and nicely made buildings

It looks like that for some the Christmas Season has started already :)

The target of this rather short stage was the sim of Esterhal, home of the Dumpling's Country Club, where I spend a good amount of my Saturday afternoons with the lovely soundtrack of DJ Rosa.

I was lucky enough to find a place where I could rezz just nearby, so I did not have to look for too long a place where to moor the boat. Despite being oftern at Dumpling's I had never looked at the area closely and I was surprised to realize that this is quite a developed pirate area, with many vessels and even a ghost ship!

Next stage, Borgenite, once home of HRH Princess Ivory and Master Peck. 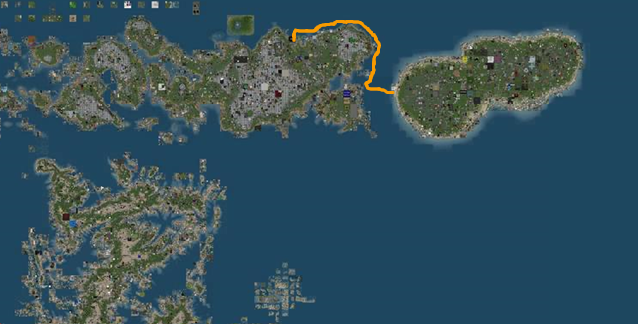 Winterfell is celebrating its third year 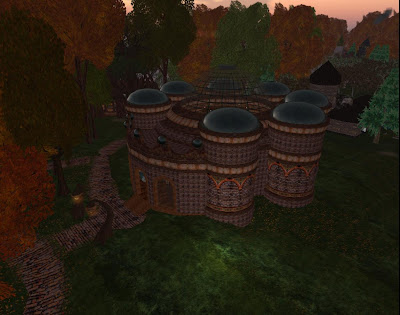