Miss Alpha has decided to sell her sim of Mishra, in the northern continent of Gaeta V, on Mainland.
Mishra has been a fun place to be, with many things taking place, both on land and in the sky, and I particularly love the Bay, which has often been home to many of my ships.

So, I am a little sad to see this beautiful place being sold. I hope Miss Alpha will be able to find a good deal, since the land market is so low. But a mainland sim with good water access should still find market.

So, here I am, with a couple of my ships, the Hunting Star and the Flying Star, that often have seen this bay as their home port, to say good bye to the place. Farewell Mishra, I will miss your shores

Posted by Wildstar Beaumont at 8:40 PM No comments:

How SL shaped my tastes

I am spending my Summer vacations on the beach these days, mostly reading and napping and relaxing (no, that's not me in the picture. I just took it :) ). 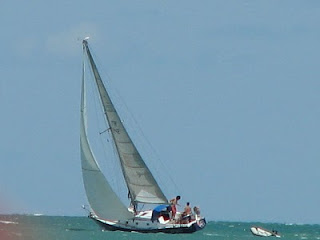 About a hour ago I decided to listen to some music on my cell phone. Being lazy I chose one of the automatic playlists, the one with the most played songs. The first song that played was the Seafarers. I smiled, because beside being a music piece I love, lately Miss Gabi has started playing it at every Radio Riel event where I am present.

The second song was from Spinning Mule, the RL album from one of SL favorite live performers: Russell Eponym. I love to go to Russel's shows. They are soft and relaxing. After that, one song from the Songs of the Fleet played. I did not know the Songs of the Fleet and neither the Songs of the Sea  until I first listened to them on Radio Riel, a couple of years ago, during on one of their Pirate and Seafaring music programs. The next song that played was from a Day at the Fair, the album from Tamra Hayden, or, as she is better known in SL, Tamra Sands. Tamra is a Broadway star in RL and, having always loved musicals, I love to listen to her concerts.


When next came Caledonia, I could not help but recognizing once more  how much SL has shaped and influenced my music tastes over the past years. If we add to that that while I was listening to the music,  I was also reading on my kindle China Mieville's  Perdido Street Station, a book that I had bought a few months ago when I searched for a few novels with a Steampunk theme, I think that it is impossible to deny that SL has had a deep cultural influence on me that goes far beyond spending time in-word, and playing the part of the sailships captain (oh ... I am also reading Hornblower in the West Indies ;) )


Well ... just thought it would have been nice to share these thoughts. I hope nobody died of boredom :)


W
Posted by Wildstar Beaumont at 7:29 PM No comments:

Yesterday was my RL birthday, and it was also the third annversary of my being a Winterfell resident.
These have been three happy years in a wonderful region where I met great people and I have always been happy. My thanks to Miss Serra for having created this wonderful region 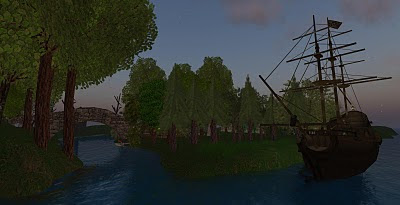 Posted by Wildstar Beaumont at 9:34 PM No comments: