I have just realized that I haven't blogged in quite a long time. SL has been laggy enough to frustrate all my attempts of sailing, so, my next stage in my mainland exploration (from Corsica to Gaeta) is still on hold. I have spent some time trying to grasp the secrets of physical vehicles but so far the objects I have scripted do not work yet the way they are supposed to, so I guess I need some more time there. I have also worked a bit on my test blog, experimenting with alternate templates. I think I will move to a three-columns template soon.

I think that the most significant event in the past days has taken place outside SL, in one of the Opensim grids: OSGrid. I have spent some time in other grids in the past, exploring there. I have spent quite some time in Openlife, even if I have not been able to log in lately because of some issue with the version of the viewer I am using (I have downloaded the latest but it still does not like it). I had been in OSGrid a few times, but not quite as much as in Openlife. It looked even less developed to me at that time, but I confess I did not put much effort in a good exploration.

Following Mykyl's opening of a Booksmythe extension in that world, I decided to go back there and have a look. I was quite surprised by the level of development. The Booksmythe is in Quirm, a little victorian village, wonderfully built and with great ambitions for its future.

The buildings have been created with great skills and original textures and the overall feeling of the place is great !

The area is built around a nice lagoon and I think I need to find a boat there soon. And if I do not find one I will have to build it ! (see the scripting exercises mentioned above) :D I wonder if there is wind in OSGrid ;)

After this first exploration I was invited by Morris Vig to visit the sim of Teravus Plaza, where he has a home.

I went there and I was as impressed. Another nice village with classy buildings in a beautiful landscape.

I like that the Hippo Viewer , used to access OSgrid, has the Torley's windlight settings installed by default. There are so many more options for great settings and atmospheres, like the one I used for these shots.

I need to explore more. These worlds are a bit lonely at times, because you rarely meet people there, but when you do, thay usually are so involved in what they are building that their enthusiasm warms the heart.

Just below the Airbase I have built a shipyard, where I play and experiment building flying and floating objects. I built my steamcopter here and I have other things under construction, like the schooner (eventually I have to return to it and complete it :) ) and other toys.

Recently I have started a big airship (and I mean BIG!) that I intend to be the flagship of my air fleet (yes, the sea is too small ! ** laugh **) and a baloon, not appearing in the picture, that I am going to use as a shuttle together with the steambopter.

There is still a lot of work to do but so far I am not displeased with the overall look. I look forward to a transcontinental crossing !

Posted by Wildstar Beaumont at 12:07 AM No comments:

this Saturday was packed with events, expecially because of the Grand Tour that is continuing today.

I could not attend everything, of course, especially because the saturday for the friends of Faeria is based on PHC. Yesterday's edition was a Valentine's Day edition and it was great fun. It was my turn to host the meeting and, at first, I had thought to host it at my home in Aurora Town, but then I thought to build someting special, given the event, and I prepared a heart shaped platform.

I think it looked nice enought and I hope my friends enjoyed the environment and the event.

A few hours before PHC I was at Tinyville in Caledon Tanglewood for the second reading of the Wind in the Willows. The readings will cover all of 2009 with a monthly appointment for each chapter, in close cooperation with that wonderful institutuion that is Radio Riel. This time the event was also part of the grand tour and of the Valentine's Days festivities. So, after the reading, the tinies could have fun at the ValenTiny Day Ball.

The reading itself started late because it was spoiled by a griefer who started rezzing physical objects that filled the sim and eventually crashed it a couple of times. Despite some grumbling the spirit of the people present did not diminish and in a few minutes everybody was back and enjoying the time there

Today is another full day. I must start planning for tonight. So, for the moment, I wish everybody a happy Sunday. :)

I have not told about my airbase, 2000m above Winterfell Ebonshire, in a while. It is growing slowly but nicely. It has now a shape that I like, a bit of disordered look, but it is the effect I wanted to achieve.

I have a number of landing platform for smaller flying objects and a couple for big airships. And of course there is the runway for the planes.

In a couple of weeks I plan to have 2-3 automated shuttles connecting the ship to Star Port, the castle (still under construction), 1000m higher, and maybe other places in the sky above winterfell.

I am also working to two airships: one smaller to be used as a shuttle together with the steamcopter, and a big one (it can be seen in the lower portion of the picture) for longer explorations.

I may organize a grand opening with a maiden trip of the shuttle in a few weeks :) 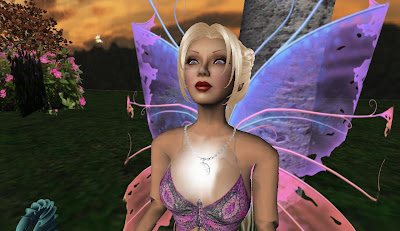 It is one year already.
the 10th of February of 2008, the day of her 20th birthday, our dearest Jewel left us.

Pixie dust and faerie wings sparkle in the garden.
Mushroom clumps and toadstool rings
Surround us in perpetual spring,
And I can hear the windchimes sing,
As I float here in the garden.

Flying in the glittering night, there's magic in the garden.
A lover's embrace to hold you tight,
Strengthening your second sight,
A mother's voice, filled with light,
All live here in the garden.

The trees are swaying in the day, there's life here in the garden.
How long they'll be here, who can say,
Perhaps they'll vanish, perhaps they'll stay,
But life continues anyway,
To bless the faeries garden.

Well ... I made it.
After some struggle, a few setbacks and a couple of changes of route I docked at last on the southern shores of the Corsica Continent.

The trip had started a few days ago in Nautilus City and it has followed the route showed in red in the map. I found a few problems, like the waterways obstructed with prims, beside the usual banlines, but I was always able to find an alternate route.

Sometimes I had the feeling that some people do not like sailing, and take actions against it, like in the sim of Hunnicutt (the yellow circle in the map) where I spent some times wondering why the boat was not advancing until I realized the the open water was not really such as invisible prims were obstructing it 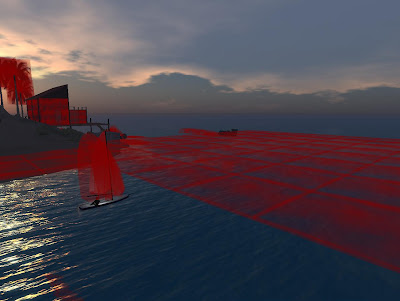 My Flying Fizz, the Little Star, performed greatly during the trip and I became much more experienced in controlling this great little boat, which is fantastic in open water, but, being so fast, can't be controlled as easily in narrow passages.

A couple of sim crossing were tricky, because I had go diagonally from one sim to the other, with emptiness on one side and no room on the other. I barely made it but I made it.

I went through really lovely areas on my way. Sometimes one can find places in mainland that have little to envy to the most famous estates.

It was great to be able to realize that I was clear of Nautilus and any potential further obstruction and realize that Corsica was just ahead of me.

Well, I am in Corsica now. With the next stage I plan to reach the Majipoor Yacht Club which is in the SE part of the sim. I'd also like to repeat the trip with a larger boat, like the Morning Star (a Trudeau Tradewind) or the Battlestar (a SPD Frigate).
Stay tuned :)

YAY !
I reached the southern shores of the Corsica Continent sailing using only SL wind !
A full report soon ! :D

Posted by Wildstar Beaumont at 12:21 PM No comments: 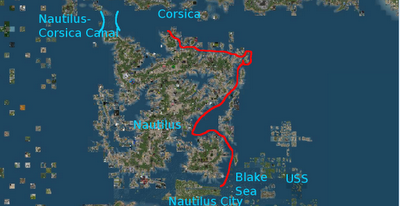 In the last days I have been exploring the northern shores of the Nautilus continent looking for a way to reach the narrow canal in the NW part of the continent that connects it to Corsica.
As usual sailing in mainland is a challenging experience being many waterways obstructed by banlines, security orbs or simply prims assembled directly on the waterways.
Even more challenging was the fact that I decided to use the Little Star, which relies only on the wind and can't use an auxiliary engine in difficult situations.

I left from the NE point of Nautilus City, just next to the Blake Sea, and I sailed along the eastern border of the continent. I checked the map before starting the trip and there was no way to find a successful western route. It is really as pity because just a few sea sim along the western coast of nautilus would make it possible.
The red line on the map shows where I have got. It took a few stages - I had to learn how to go around a few blockages - but I got far enough. The canal connecting Nautilus to Corsica is not too far away. Unfortunately I read a few reports that there are problems before reaching the canal, so I have not made it yet.
The original plan was to reach the Majipoor Yacht Club, but looking closely at the map I have relized that there is a new canal connecting Corsica to Gatea. The plans of connecting all the mainland continents, siggested here and there in some blogs, look under way. Eventually it will be possible to reach even the beach of Mishra. Wouldn't be that great ? :)

W
Posted by Wildstar Beaumont at 12:12 AM No comments:

I have nothing very interesting to tell. Sailing has been very difficult in the past couple of days and I have been stuck somewhere in Northern Nautilus on my search for a way to Corsica. For the rest SL has been a bit boring lately.

But I'd like to share a beautiful picture I took at the Black Spot Shipyard, one of the places I like to visit very often. They build fantastic ships there, both static and drivable. A true pity they do not work with SL wind but the crafting is among the best I have seen in SL.

Just walking there and looking around makes me happy :)

Posted by Wildstar Beaumont at 8:36 PM No comments: